BACK
A football miracle at St. Bernard’s 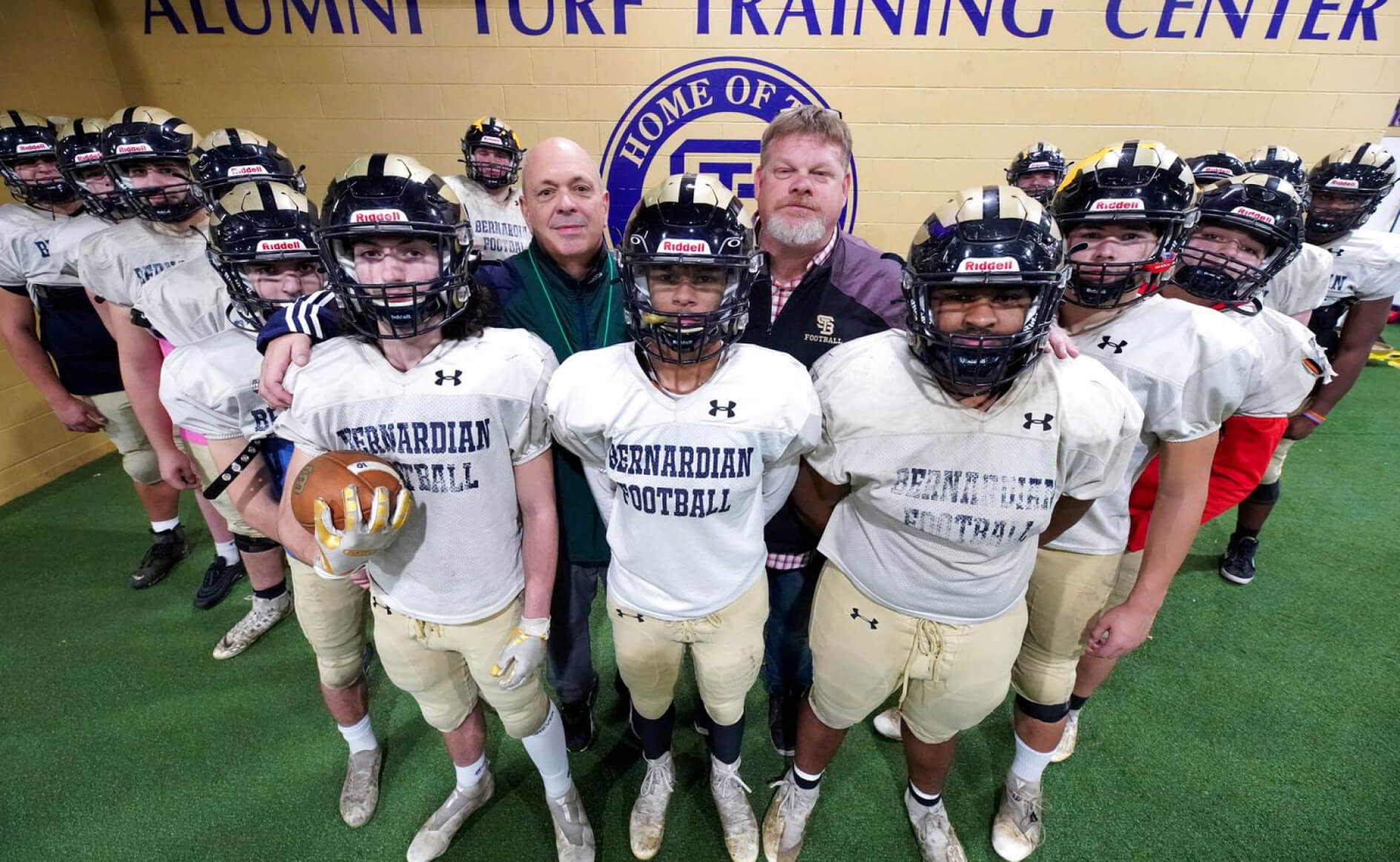 It’s an against-all-odds tale of a small Catholic high school in Central Massachusetts under severe financial pressure and a team of can-do football players who succeed in ways that even the most risk-taking screenwriter would not dare to imagine.

But it happened. And it’s happening still.

“I don’t know if it had been done before,” said filmmaker Gregg Backer. “You have this Catholic school from a not-very-wealthy town and to have them succeed like they did. I looked at Evan and I said, ‘We have to tell this story. So how do we do it?’

“It’s about overcoming challenges,” he said. “It’s about community and family and hard work. And all these things that are truly inspiring. It’s a feel-good piece. And we hope we have done justice to the community because they really did the work.”

I’ve gotten an early peek at Backer’s and Kanew’s new film from Gravitas Ventures called, “All In: Miracle at St. Bernard’s,” to be released on Dec. 13, about the football team’s unlikely Super Bowl win in 2019 and how that coincided with efforts by the St. Bernard’s community to save the school.

And I’m no movie critic, but I can say this with some confidence: Mission accomplished.

Anyone who has a high school football player in their household, anyone who has ever walked the halls of a small high school, anyone who has struggled with an algebraic equation or a book report on “The Adventures of Tom Sawyer,” will find themselves cheering on this team at the center of Backer’s and Kanew’s latest cinematic gem.

The characters are real. And they’re inspiring.

There’s an earnest principal who leads her school with courage and heart and front-office guts.

There’s my old friend Paul Constantino, a theology teacher, assistant football coach, and head boys’ basketball coach, who is a gem of a man -- a guy who improves any organization lucky enough to have him.

At the center of it all are these young players with faces from Everytown USA, kids who pour their heart and soul into their team, their school -- and into themselves.

“It’s such a small school and that close-knit community helps at school and on the football team because everyone feels as one,” Rocco LaMonica, an 18-year-old St. Bernard’s senior who is the team’s nose guard and offensive tackle, told me when I visited the school the other day. “It’s just one big group. And everybody’s helping everybody.’’

He paused briefly before adding: “I love the team. And I love the school.”

So does his teammate Antonio Mancini, an 18-year-old running back.

“I wouldn’t want to be on any other football team,” Mancini told me. “I love the chemistry that we have. I love the team that we have. It really feels like a second family. I think that’s where we get our success from.”

But success is not conjured from inspirational words and from fancy speeches.

It comes from hard work. From a single-minded kind of determination. From having one another’s back.

From the sweat-stained practices that begin in the heat of late August and continue sometimes even after the first snow flies.

And when you superimpose on that the real-life financial struggles familiar to many small, private high schools, you have the raw material, the creative clay for a soaring story that inspires creative filmmaking like Backer and Kanew have conjured from the green fields and school corridors of Fitchburg.

Few people embody the essential DNA of this story more deeply than Linda Anderson. She’s the principal at St. Bernard’s High School. Raised in Southbridge, where she went to a small elementary school, she knows places like this.

“When I moved here, I just immediately felt at home in Fitchburg because it felt like where I grew up,” Anderson, 36, said. “Absolutely. Mills went out of business. Lots of poverty.”

Lots of guts. And heart, too. You need it when you preside over 200 students, and 15 full-time faculty members.

But first, she had to find the front door.

“I remember it was the summer of 2010, and I had been asked to come and interview and I’ll never forget walking up those main stairs,” she said. “Beautiful, beautiful entrance and I was just like: ‘What is this place?’ It just seemed like it came out of another era. And it did.”

If it was a throwback – something out of a Frank Capra movie – it had an appealing educational DNA, too.

“This place has this magical ability to attract a certain type of person who is just very heartfelt and very ego-less,” she said. “And it’s rare. Everyone has complexities to their identity. But St. Bernard’s just has a very magical way about it. I call it a lighthouse. It just draws the right people in.”

Anderson would need all of that and more when attempting to navigate the treacherous and unforgiving finances that were made black-and-white and urgently plain to her by the diocese’s financial team.

“We’re not financially making money yet,” she said. “We’re still trying to balance our own books.”

The diocese leases the building to the school and keep close tabs on the school’s tuition and its fund-raising efforts.

“I mean we grow every year,” she said. “We need to keep growing.”

All of it can be anxiety producing.

“It was like a Ping-Pong game,” she said. “It would go from one end to the other. We’d have a magic moment where it was like, ‘OK. We’ve got this.’ And then something would happen and we’d say, ‘Oh, no, we don’t.’

“It just went back and forth. And I think what this documentary is trying to pull in was that [2019] Super Bowl win felt very symbolic to us in so many ways.’’

Now, they stand on the threshold of another Super Bowl.

There is a football game to be played on Friday afternoon at 3 p.m. And there is a school and a legacy to polish and to preserve.

And they’re all in this together.

Nick Pelletier, a school alumnus and president of a local real estate company, is treasurer of the Bernardian Charitable Foundation, a newly formed group that is supporting the school – efforts made easier with the football heroics of the school’s team.

“You didn’t want them to feel walking into every game that they had a whole school that we were trying to save,” Pelletier said. “But you knew, every time they won, you had to sell it and sell it as much as we could.”

They’ll all be there Friday afternoon. Cheering on their team – and their school. Writing another chapter in the storied history of St. Bernard’s High School. The little school that could.

“Nothing better than that.”

Darnell Woodson, the team’s center and a defensive lineman, nodded his head at that.

That’s the kind of spirit and determination that can carry a team.

And save a school.